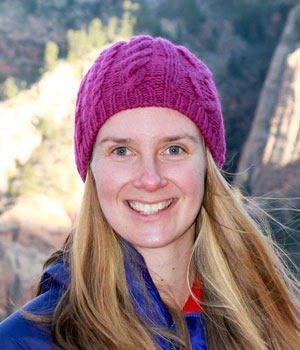 For contributions to theoretical cosmology and astrophysics, in particular, pioneering approaches to modeling key observables and extracting cosmological constraints from large galaxy surveys.

Elisabeth Krause is an assistant professor in the department of physics and the department of astronomy at the University of Arizona. She received her Diplom in physics from the University of Bonn in 2007, and her Ph.D. in astrophysics from Caltech in 2012. After postdoc positions at the University of Pennsylvania, Stanford, and JPL/Caltech, she joined the faculty at the University of Arizona in 2018. Dr. Krause's research combines theoretical cosmology and data analysis, with focus on interpreting measurements from large galaxy surveys. She pioneered joint cosmological analysis techniques that combine highly correlated tracers of the universe’s large scale structure and has held several leadership positions in cosmology survey collaborations. She currently co-chairs the science committee of the Dark Energy Survey. Her honors and awards include a 2018 International Union of Pure and Applied Physics Young Scientist Prize and a DOE Early Career Award in 2019.

About the Maria Goeppert Mayer Award

The Mayer Award recognizes and enhances outstanding achievement by a woman physicist in the early years of her career, and provides opportunities for her to present these achievements to others through public lectures in the spirit of Maria Goeppert Mayer.

The award was established in 1985 through sponsorship by the General Electric Foundation (now the GE Fund) and generously endowed by Dr. Virginia Trimble in 2019.