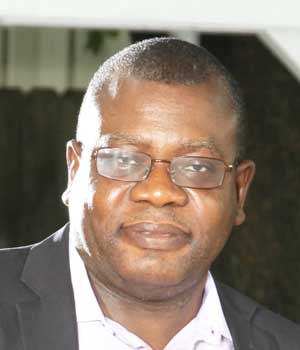 Recipient of the 2021 Excellence in Physics Education Award

Anderson Sunda-Meya is Associate Dean of the College of Arts & Sciences at the Xavier University of Louisiana, Norwood Endowed Professor of Physics, and Director of the Dual Degree Engineering Program. A scientist, teacher, and humanist, he has displayed the discipline to remain at the forefront of research and the generosity of spirit to share these accomplishments with students. With his persistent support to engage students and faculty, he has developed an environment for success for students. He has established programs that blend scholarships, curricular refinements, mentoring, and support activities designed to attract, retain and graduate more African American students in STEM. His interdisciplinary research has been funded by NSF, ARMY, ONR, DURIP, as well as the US Nuclear Regulatory Commission (NRC). His research interests include thin film devices, growth, and characterization; cell penetrating peptides for drug delivery; robotics/mechatronics and autonomous system; K-12 STEM and curriculum innovation; makerspace and engineering education. He is an award-winning teacher and mentor, having won Xavier University Norman C. Francis Award for both Service (2011) and Teaching (2013). Anderson Sunda-Meya received his BS in physics from North Carolina Central University (2001) and his Ph.D. in Physics from North Carolina State University (2007). He also holds a BA and a laurea (MA equivalent) in Philosophie and a BA in Theology from Gregorian University (Rome, Italy).

About the Excellence in Physics Education Award

The Education Award recognizes a team, collaboration, or an exceptional individual who has exhibited a sustained commitment to excellence in physics education.